I have a few blog posts rattling around in my head, but I can’t very easily create any of them because of this: 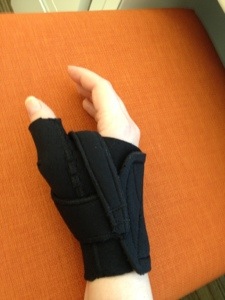 Well, I’ve made it to 16 weeks. Many of my coworkers know, I’ve had to pack up not only pants but also tops that no longer fit, and I’ve bought a decent amount of maternity clothes. I recently shared the news on Facebook.

The baby is about the size of an avocado from head to bum. One app, having already switched to head to toe, describes the baby as the length of a carrot. Holy crap, is there really a little creature that long inside of me?!

Updates on baby development now include things like, “baby can react to bright lights by turning away” and “baby’s inner ear has developed enough to hear loud sounds.”

It’s been a few weeks, a month even, since I felt the first flutters. I was laying on my stomach (I still felt ok doing that then), and I felt this repeated tapping on the front of my belly. Having read in so many places that you usually wouldn’t feel it yet, especially if this is your first pregnancy, the thought that this was baby flashed through my head only to be written off. But the next time I saw my Dr he described to me what it might feel like and I realized that must have been baby moving. Since then I feel the flutter sensations every few days at night when I lay down for bed.

It all feels very real now!

Not knowing quite when the baby will be able to hear my voice, I’ve started cradling my belly and saying good night to it. It feels a bit silly but I don’t care. It’s our baby in there and I love it already!

So I’m over 3 months along and it’s clear to hubby and I that I’m showing, as I’ve gone from this: 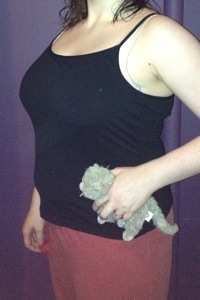 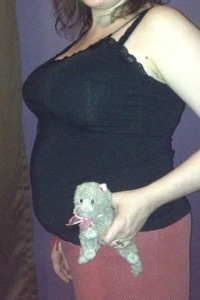 This week, for the first time, a coworker noticed my bump and congratulated me. I was very excited!

Yet I have other coworkers, even friends I eat lunch with regularly, who know I’m pregnant but insist I don’t look it.

It hasn’t escaped my notice that these women who think I don’t look it are naturally thin (and less endowed), and the one who did notice without my having told her is a larger lady.

Granted, due to my large bust, if I am wearing a shirt that hangs loosely from the bust line, it is hard to tell what size the belly below may be. But 3 days this week I wore outfits that I felt showed off my new bump, either a lycra top or a dress with a belt or waistline under the breasts. 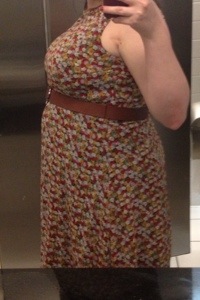 I can’t help but wonder, does their mental image of me just include so much extra size that they can’t tell the difference? Perhaps all the usual loose tops has made them think I had a belly under those breasts when I didn’t?

Don’t get me wrong, I’m not actually upset about this. I am happy and healthy and my husband and I think I’m beautiful so that’s all that matters to me.

But it has made me think twice of how these other ladies see larger women. Does big bust or hips or waist all equal big round ball to them?

As a dysthymic person with a history of almost yearly dips into depression, and as a planner, I took many steps before getting pregnant to prepare myself. I read articles and spoke to numerous psychiatrists in my search for one who I felt knew as much as there was to know about managing mental health and pregnancy and birth.

I know the statistics. As one who has had so many incidences of depression, it is very likely I will have more. My brain is used to this pattern, and it takes careful care to keep it from slipping back into that state where bed seems like the only place to be and life looks like a long gray stretch of things one has to do, or is supposed to do, just so that one can keep living to do more of those things one has to do. So, as such, I am at increased risk for postpartum depression.

As one doctor told me, at this point it’s more a question of when I will have another depression and for how long it will happen than a question of if. The best thing I can do for myself is to stay in regular care, take care of myself and watch my moods, and get help at the first sign of any symptoms. Knowing myself, I know the best way to do that is to have a doctor I feel comfortable talking to.

So I am glad to say I now have a good doctor that I am very comfortable with. She’s a reproductive psychiatrist and a mom of young children, and I feel I really couldn’t have better care at this point.

She and my OB told me that there was really no way to know how my brain would react to pregnancy. Some women’s moods get better, some stay the same, and some get worse.

Well, at about 3 months pregnant, I’m thrilled to say that so far, I’ve been feeling better. I can hardly remember a time when I felt so calm, confident, and at peace. I am filled with anticipation and excitement for the future in a way I haven’t felt since we got married (almost 7 years ago!). I feel the best way to describe it is that I feel overwhelmingly content.

The low-grade, nagging worry that I felt for years as I wondered if and when we would finally have the children I’d been wanting desperately since my baby fever days (see posts in 2006 and 2007!) is gone. I worried we’d never have the stability or health we were waiting, I worried we’d have trouble and I’d worry it was because we waited too long; I worried I we would be one of the 10-15% of couples who would have fertility troubles.

The sane side of my brain knew that I was and am lucky, being in a committed and strong relationship, with two capable individuals on solid career tracks, who earnestly look forward to having children together. Still, while I might bury it at times, it was hard to completely rid myself of those worries.

Until now. At nearly the end of my first trimester, with Husband recently starting a new, salaried job with great pay, and with me a year into a job that is my favorite yet and where I’ve earned recognition for my excellent work, all of those concerns are gone.

The anxiety that I wrote about in the trying to conceive and early pregnancy days has faded. Women in my forum groups write about their worries and nervousness, about their screenings and the baby’s health, and I don’t feel it. I know the odds and am confident that we are making a healthy baby. Our healthy baby.

I feel happy, healthy, confident, and excited. I know I am extremely lucky, and I am thankful. 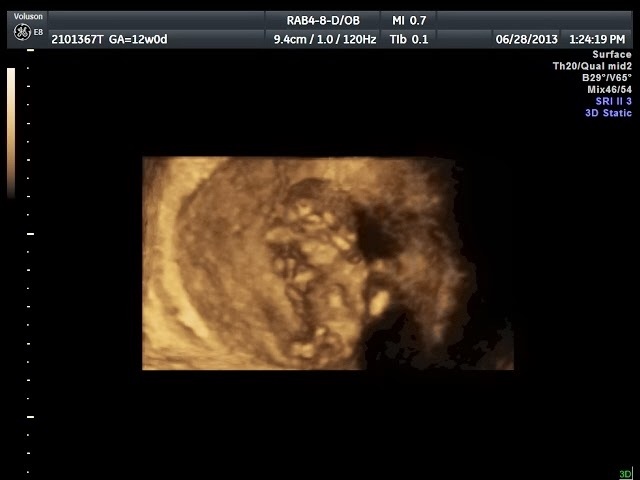 Husband and I were talking one night recently about genetics and the likelihood of having a boy or a girl. As we were counting up the ratio of boys and girls on each side, I paused when counting my fathers siblings.

That was when I remembered – my father is a twin. It’s a fact I often forget because unfortunately, his brother died as a baby.

That’s when the question dawned on us, are we more likely to have twins? It’s something that I’ve been told is possible since I was a child, but which I forget, often. Again, because of the whole never having met or heard stories about my father’s twin. Because my dad doesn’t remember much more than what his picture looked like. I think I had only seen the picture once, but luckily just the other day my father sent us many pictures he had scanned in, including the one of him and his twin.

So we began investigating the question – are we more likely to have twins because my father was one?

Do twins run in families?

First, it depends on if you are talking about identical or fraternal. Identical twins are the result of the zygote dividing in two. Scientists don’t know much about what causes this, but as the rate, about 1 in 285 births, has remained constant over time and around the world, it seems to be a random occurrence. It does not occur because of genes.

But what about fraternal twins?

Fraternal twins occur when more than one egg is released at ovulation and fertilized. When this happens it is called hyperovulation. Hyperovulation can be genetic, though it can also occur in women with no family history of twins, particularly if the woman is older or on fertility medication.

Since ovulation patterns are determined by the woman’s biology, fraternal twins must run in the mother’s family for there to be a genetically increased likelihood of conceiving twins.

If fraternal twins run in the father’s family, then any daughters he has have an increased likelihood of having twins themselves. And that leads to the sense that twins skip generations.

So if my father was a fraternal twin, then he was no more likely to have twins than anyone else, but I am more likely.

I’m not sure though, if his twin was identical or fraternal. He may not even know for sure, as they obviously wouldn’t have done genetic testing in the 1930’s, so back then fraternal twins that happened to be very similar could be mistaken for identical twins.

Therefore even with the aid of the picture, we may never be certain if he was a fraternal or identical twin. There seems to be a very strong family resemblance among my dad and his siblings. My father’s two older brothers looked like twins as children, but they were not. 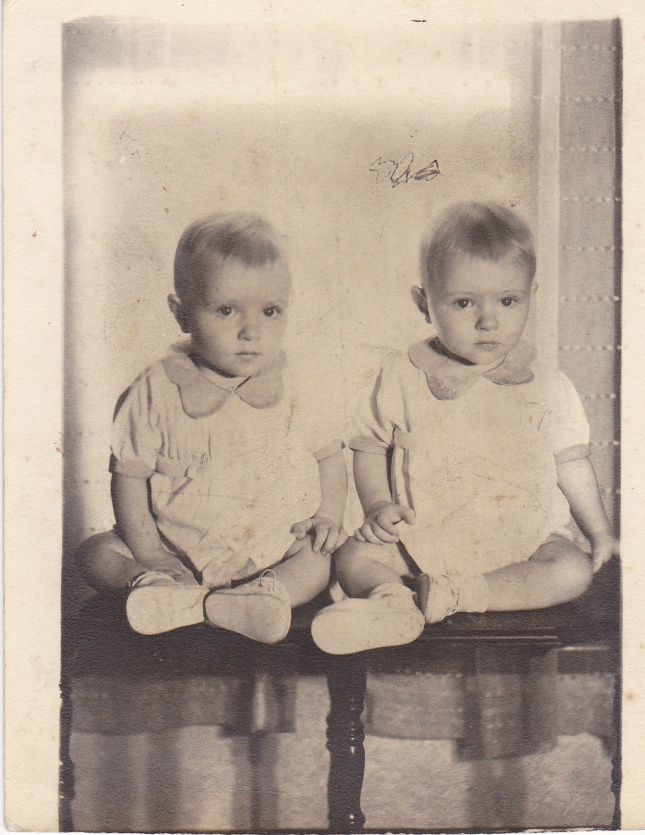 My father and his twin

My husband is convinced there are differences in the two faces in the picture of my dad and his twin brother – mainly around the width between the eyes and a little bit in the mouth. But even if that’s true, I recently read that identical twins can have differences in facial features and other aspects, because of environmental factors affecting gene expression that impact growth even in the womb.

So, as for me, the jury is out. I may have an increased chance of conceiving twins, but we won’t know for sure unless it happens some day.

"I'm never as happy as when I'm pregnant. I literally would have 10 babies if I could!" ~ Tori Spelling

What? You want more?

You can e-mail me at FlickaMawa [at] gmail [dot] com.

I purr for these people:

Join the Out Campaign